With an ever-increasing number of people living in urban areas globally, cities and their surroundings, especially in low- and middle-income countries, are facing increasing challenges to meet the demand for basic needs services, such as housing, food and water, education, healthcare, and sanitation services. Innovative, non-traditional approaches are needed to cope with the challenges resulting from rapid urbanisation and population growth in the water and sanitation sector.

This article was first published in the MOOC on “Achieving Sustainable Development” delivered by Trinity College Dublin and the Trinity International Development Initiative, hosted in FutureLearn. Find out more about the MOOC in this blog post.

What are peri-urban areas?

According to the United Nations, it is expected that by 2050 two thirds of the world’s population will be living in urban areas – this is nearly one billion people more than now. With this increased pressure on already rapidly growing urban centres, there will be an inevitable expansion of the urban fringe into the rural surroundings outside the formal city-limits. This overtaking of rural land traditionally associated with agricultural and recreational land use creates so called peri-urban areas with mixed, and sometimes competing, usage patterns. Traditional city planning tools and municipal institutions are often not equipped to provide basic needs services such as adequate housing and water supply, electricity networks, or formalised sanitation services in those peri-urban areas. The extent of such underserved pockets in the urban landscape is, nevertheless, growing worldwide.

What are the challenges?

The provision of access to improved water and sanitation facilities is an important measure for the functioning of a city. An “improved” sanitation facility is, according to the World Health Organization (WHO) and UNICEF, one that hygienically separates human excreta from human contact and is not shared among several households. 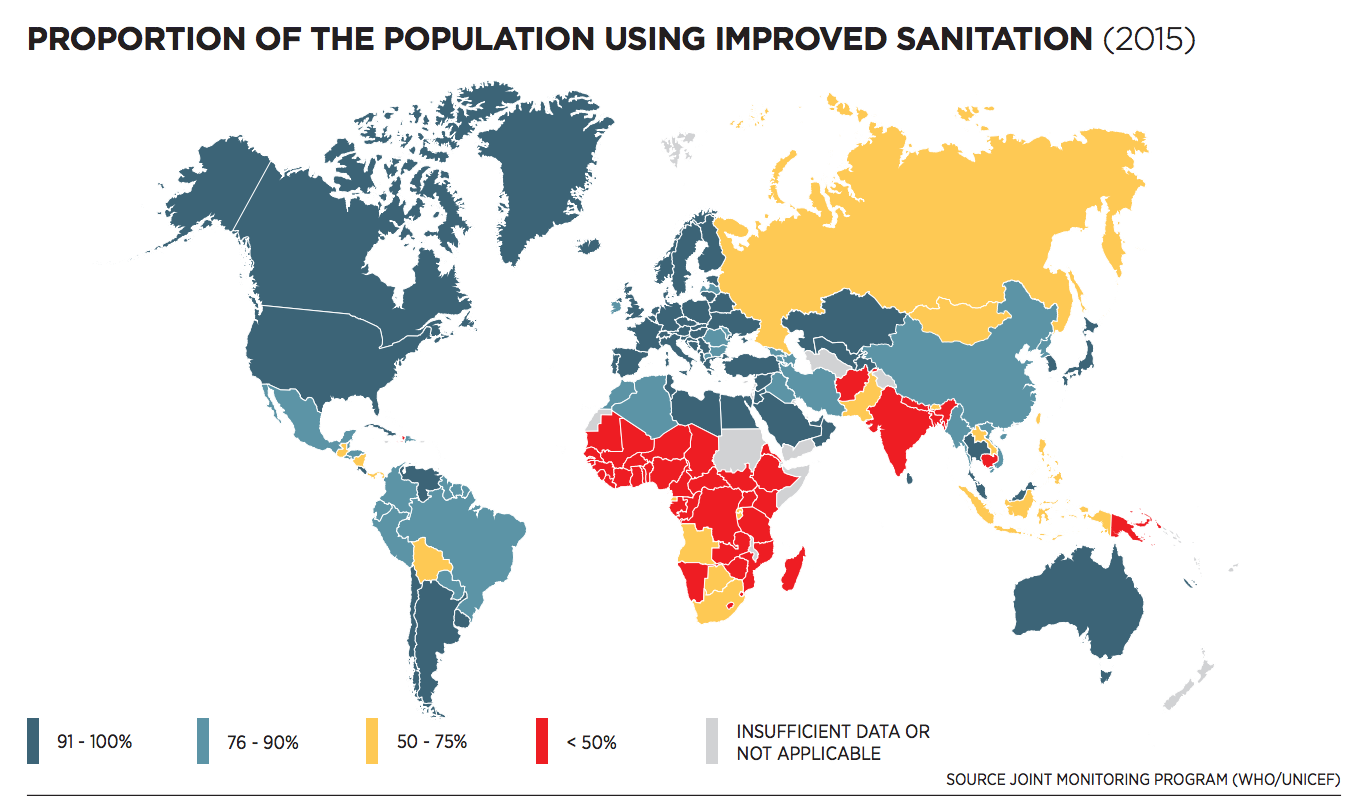 Especially in peri-urban areas, the diversity of backgrounds of their residents can lead to equity and power issues, social tensions, and a lack of community cohesion. This can pose an additional challenge to agreeing on expectations for the provision of public services among stakeholders and, thus, rapid changes in urban growth patterns are hardly ever directly reflected in updated city planning strategies. Especially a functioning wastewater conveyance and treatment infrastructure is often very low on the priority list of many city and town planning departments in developing countries. For example, in India, less than 20% of the total wastewater generated is actually treated. Traditional approaches essentially focus on large-scale centralised systems under municipal oversight, carrying high cost of investment and for underground transport in extensive sewer networks. Because of the long implementation phase and lack of flexibility, those approaches are not the most suitable for rapidly growing peri-urban settings. You can find more information about the complex socio-cultural interrelations regarding sanitation planning in peri-urban areas in this short report.

What are potential solutions?

Especially in the peri-urban context, decentralised approaches offer a more flexible strategy and have been adopted across many different regions that are under-served by centralised networks. The implementation of onsite and decentralised cluster treatment systems is, generally speaking, less resource intensive, more adaptable to local conditions. Wherever possible, their design is guided by the idea of creating low-maintenance, natural treatment systems without the need for energy inputs or the use of technical equipment.

However, to achieve SDG6, sanitation interventions should not only rely on technical improvements on the infrastructure, but also address procedural and behavioural changes in the community. Integrated approaches including capacity building and education in proper sanitation and hygiene practises are needed, regulations and guidelines must be drafted, and professional operation and maintenance procedures be devised to be able to scale decentralise solutions adequately. You can have a look at how community-led initiatives take on holistic approaches to collaborative sanitation solutions in Indian villages in Joe Madiath’s passionate TED talk in this video.

Yet, to improve overall sanitation levels in urban and peri-urban areas, the whole sanitation value chain has to be taken into consideration. Even though, according to the WHO, a staggering 946 million people worldwide still defecate outdoors, it is not enough to only provide toilets and basic sanitation infrastructure. Proper collection and storage of human waste, its conveyance to an adequate treatment facility, and the need for local resource reuse and final disposal are equally important factors in building a sustainable sanitation infrastructure. So-called Sanitation Safety Plans (SSPs) provide a structured set of tools to identify and manage health risks associated with the use of human waste. Developed by the WHO in 2010, they particularly focus on sharing roles and responsibilities among different sectors and stakeholders, e.g. from local authorities to utility operators, business owners, and sanitation workers. At the same time, a SSP identifies all waste streams within a certain geographical boundary, say a specific peri-urban town. This can include the management of open stormwater drains and the sewer system, solid waste collection and transfer, septic tank sludge collection and disposal, and agricultural uses of wastewater. After all the parts and stakeholders of the sanitation system are identified, a comprehensive risk assessment and incremental improvement plan is agreed upon, monitored, and reviewed regularly. You can find out more about how SSPs are implemented in practise in this short video.