Scientific conferences are always a great way to meet people and learn more about exciting research in your field and in other disciplines. This year, I am honored to present my and my colleagues work on environmental impacts of small scale wastewater treatment systems at the 2019 ASA-CSSA-SSSA International Annual Meeting in San Antonio, Texas.

The 2019 ASA-CSSA-SSSA International Annual Meeting (November 10 - 13, 2019 ) in San Antonio, Texas, is all about Embracing The Digital Environment in the fields of agronomy, crop science and soil science.

If you happen to be at the conference, come and find me at the sessions mentioned below. If you cannot make it, find the presentations and poster for download below. 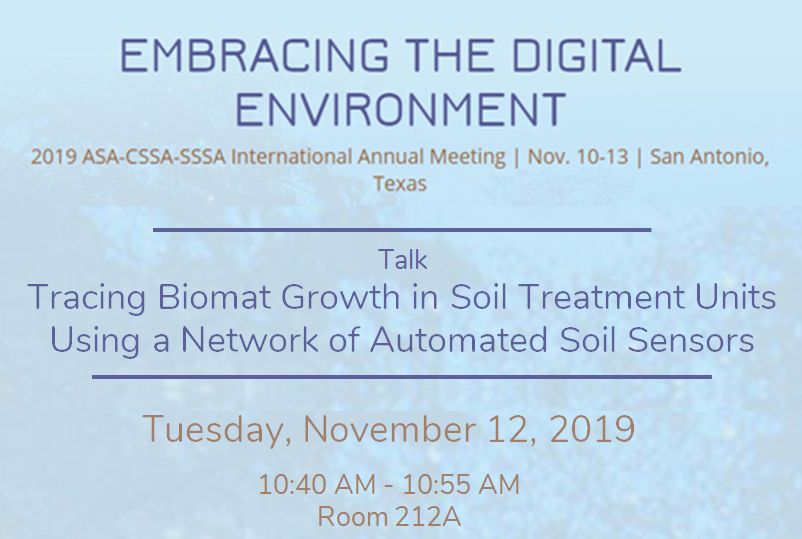 Soil treatment units (STUs) receiving domestic effluent from an on-site wastewater treatment system (OWTS) rely on the gradual development of a microbial biomat/biozone at the infiltrative surface for optimal effluent distribution and pollutant attenuation. A three-dimensional network of soil sensors monitoring volumetric water content was used to determine the influence of pre-treatment (primary vs. secondary treated effluent) on effluent infiltration and soil water retention patterns in two gravel-trench based STUs in Ireland. Sensor data and additional pore water quality analysis served as proxies for determining zones of effective infiltration and biomat development. In trenches receiving primary effluent, biomat growth was not limited by substrate availability and complete clogging of the infiltrative surface occurred after 13 to 21 months of operation, leading to ponding and anaerobic conditions in one of the sites. In trenches receiving secondary effluent (with up to 91% of TOC and 90% of TN removed) biomat growth was muted significantly and limited to the first 7.5 to 10 m of the trenches (total length: 18 m) after three years of operation, leading to a drastic reduction of effective infiltrative surface area and hydraulic overloading of the underlying soil. As a result, unit area loads of TN and nitrate were found to be up to three- and five-times higher in trenches receiving secondary effluent as compared to trenches receiving primary effluent, respectively.

With microbial processes as the main pathway for pollutant attenuation in STUs, understanding the drivers and long-term effects of biomat growth at the infiltrative surface helps to improve system design and operational procedures. According to this study, design guidelines should consider biomat development as a function of pre-treatment to minimize the risk for groundwater pollution and adverse effects on human health from STUs. 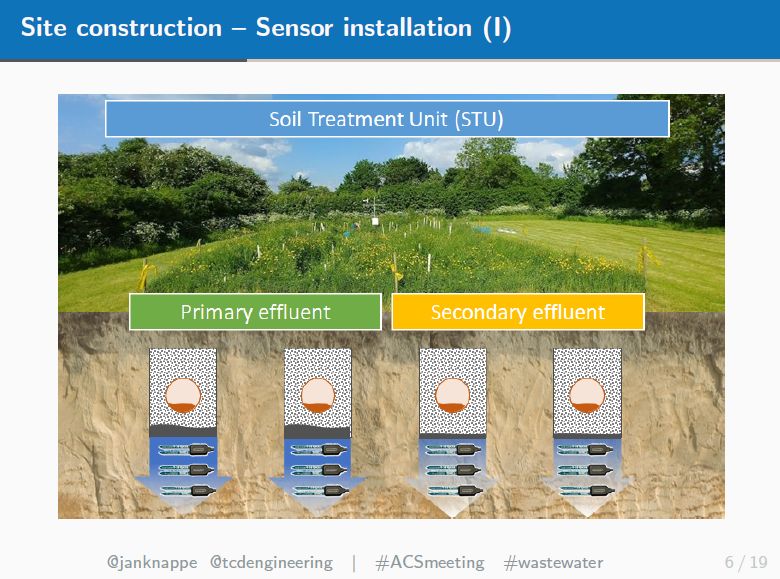 As my co-workers cannot make it this time, I will be presenting our work.

This research estimated the P and N loading to surface water arising from domestic wastewater treatment systems (DWWTS). Four small catchments, each containing a high density of DWWTS (15 - 32 DWWTS km2) and underlain by either poorly permeable subsoil or shallow, impermeable bedrock, were selected for study. The primary stream in each catchment was monitored upstream and downstream of the main cluster of DWWTS for nutrients (N and P), as well as Total Coliforms, E.coli and Enterococci. In addition, a number of mid-catchment monitoring points were also sampled in order to observe changing water quality patterns throughout each catchment. A catchment P loading schematic, describing DWWTS-P and -N loading under low flow conditions was developed. The P loading arising from DWWTS was found to represent between 1.5% and 9% of the annual P loading from the four study catchments. Likewise, between 10% and 29% of the annual N loading was estimated to arise from catchment DWWTS. In addition to the estimation of annual loading, general water quality in each catchment was characterised with respect to P and N fractions and sub-clusters of DWWTS located in close proximity to the stream, were found to result in ‘hotspots’ of severely impacted surface water. A number of models were examined with the aim of estimating the P contribution of a given DWWTS as a function of its distance from the stream. Across the four catchments studied, a power inverse model was found to provide a good description of DWWTS-P loading with distance, describing a gradual decrease in P loading to the stream with increasing distance. This has potential use in future mitigation strategies relating to the impacts of DWWTS on surface water. 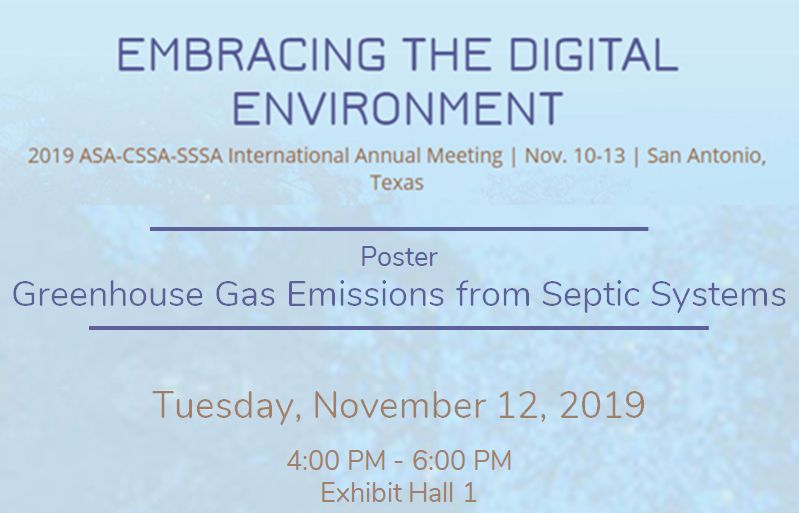 Wastewater treatment processes are a potential source of greenhouse gas (GHG) emissions. While a wide body of research has been dedicated to quantifying emissions from centralized systems, the production of GHGs from on-site wastewater treatment systems (OWTSs) received only limited targeted research to date. Here, we present results from the first study of GHG emissions from two septic tanks and soil treatment units (STUs) receiving both primary and secondary effluent in Ireland. Automated long-term and survey soil gas flux chambers were deployed between May 2017 and July 2018 over the STUs for monitoring carbon dioxide (CO2), methane (CH4) and nitrous oxide (N2O) fluxes. Emissions from the septic tanks were measured by placing the survey chamber directly onto the liquid surface and were dominated by discrete, short ebullitive events of methane. Additionally, vent system emissions were quantified on site. Overall, total observed net GHG emissions from the two treatment systems were 17.0 and 22.0 CO2 Eq. kg cap―1 yr―1, respectively, with more than 80% of the emissions in the form of CO2 and less than 3% as N2O (the remaining part being CH4). While the STU (including the vent system) was found to be the main source of CO2 emissions from both systems, the septic tank was the main source of CH4 emissions, reflecting the various oxidation stages in the treatment process. N2O emissions were highest from the vent system. However, when fed with secondary treated effluent, one of the systems expressed a net uptake over the STU, indicating that the interactions between environmental and microbial drivers of GHG fluxes from septic systems are more complex than initially thought. 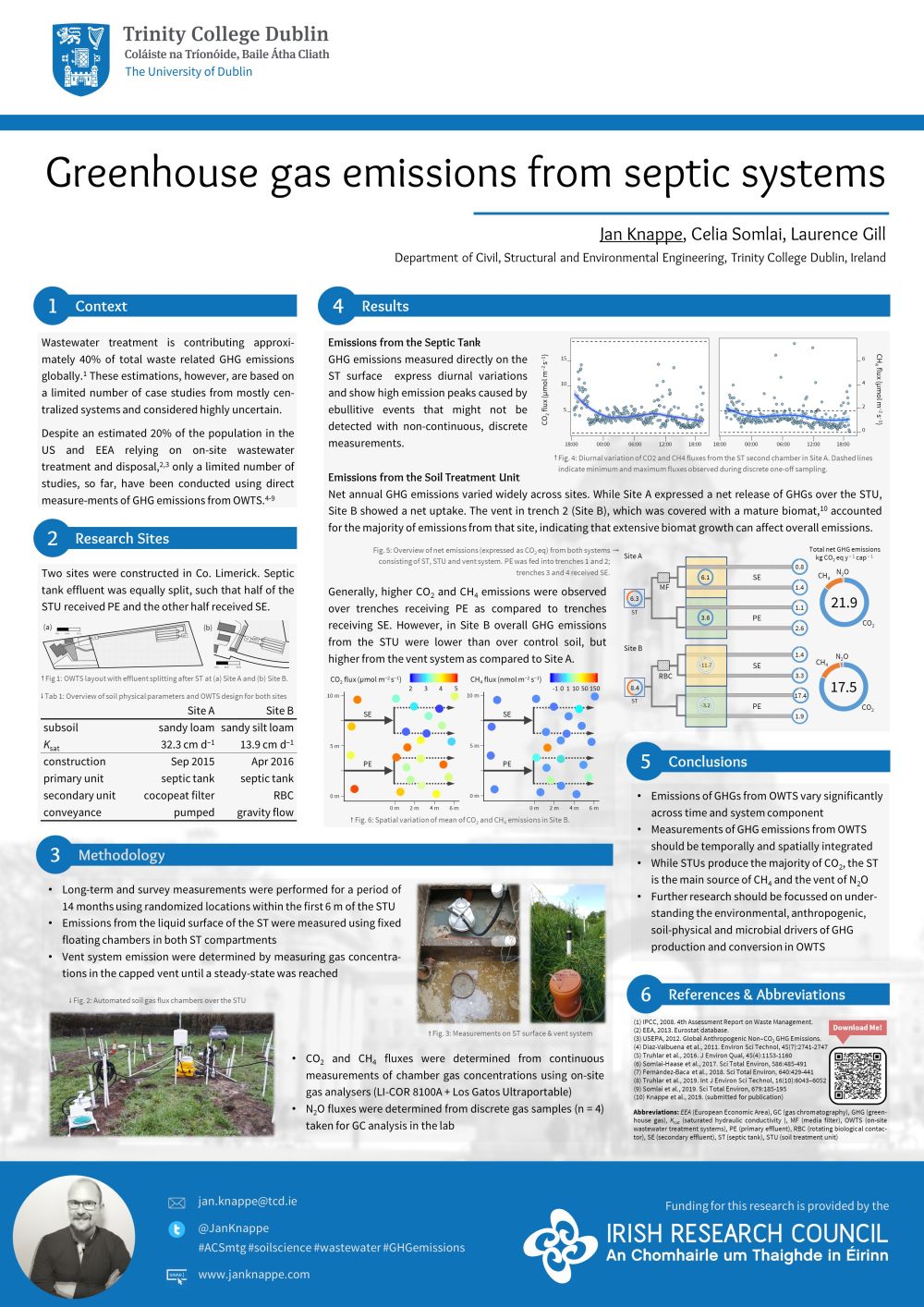